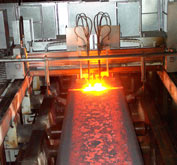 Sixty heats per day were produced at Azovstal Iron & Steel Works of Metinvest Group in two heavy-duty BOF vessels with maximum possibility of sixty-four heats, which is an absolute record for Ukraine's metallurgical facilities. The average weight of the heat was 328 tons.

The attained performance is the outcome of restructuring and modernization program implementation at the Group's metallurgical assets intended for improvement of steelmaking efficiency at the existing facilities of Metinvest's steel plants and it was achieved as a result of  well-managed preparation and running of heats by process and technological personnel of the entire conversion chain. It should also be stressed that the record was set with three out of four continuous casters in operation: caster 3 was under capital repair on that day. Trouble-free operation of production and auxiliary equipment was ensured by BOF Shop repair and maintenance personnel.

"We are capable of implementing the most ambitious plans and achieving the most convincing results", says Enver Tskitishvili, General Director of PJSC "AZOVSTAL IRON & STEEL WORKS". "Achievement of high performance has become possible owing to optimal utilization of production capacities and well-coordinated high-professional operation of Azovstal's work team".

Attaining of the world's highest production efficiency standards alongside with continuous improvements and cost cutting processes is one of Metinvest Group's strategic targets. The company sees the solution in building the effective logistics, optimization of the quality of raw materials and improvement of equipment availability for achieving the performance targets.