Metinvest youth are leaders of the future 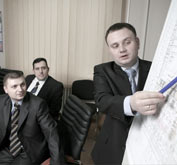 Thus, Alexander Kurpe, Head of Rolling Department (Technical Administration, "AZOVSTAL IRON & STEEL WORKS") won the category "The Best Young Innovator". Over the period of his activities at the enterprise Alexander presented papers at more than 20 scientific and technical conferences, published 11 articles in collections of scientific papers and he is a co-author of ten patents of Ukraine.

Project "International Scientific and Technical Conference – METINVEST 2011", which was held at "AZOVSTAL IRON & STEEL WORKS" in summer this year, took premier place in the category "The Best Young Initiative". Primary purpose of the conference was to develop creativity of talented youth, their involvement in the solution of high priority production, technical and economic tasks through introduction of advanced developments of young scientists and specialists having practical importance for further development of Ukrainian industry in the production operations.

Constant leadership of "AZOVSTAL IRON & STEEL WORKS" youth over recent years is strong evidence of the fact that the enterprise devotes much attention to all-round development of young specialists and enhancement of their professional qualifications. Participation in such contests allows young professionals to disclose creative and intellectual potential as best one can.

The contest "The Future of Mariupol" is annually held by Mariupol Municipal Council since 2000. 14 categories were presented at the contest, 156 Mariupol citizens pretended to win them. This contest is aimed at increment in youth social activity, promotion of the best deliverables, education, different types of creativeness and sports records. Solemn ceremony of contest results announcement and awarding of laureates and winners took place on December 9, 2011.