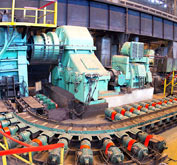 Implementation of "Lean Production Facility" program has been launched at "AZOVSTAL IRON & STEEL WORKS" since August 2011 within the framework of overall strategic initiative of Metinvest. The program is aimed at reduction of operating costs and losses as well as production efficiency enhancement.

The program initially covered Rail and Structural Steel Mill, where 5S System was started to be actively applied as one of its main tools. Production Losses Guidebook directed to the elimination of losses interfering effective production was also developed at the mill. Continuous improvement team was created at BOF Shop in late November, which target is to develop and submit proposals on technological problems solution.

In December awareness-raising workshop was held for specialists of new subdivisions, where "Lean Production Facility" program is being actively developed today. The employees became familiar with strategic program, tasks and implementation stages of its first stage – 5S tool. The employees of subdivision are actively engaged in activities on reduction of things to order at their places. Production Losses Guidebooks are also developed at the shops, which have been involved in the program.
Implementation of "Lean Production Facility" program is focused on achievement of strategic targets of Metinvest Group in the sphere of value adding to the products for clients, reduction of losses and unjustified losses.