Vladislav Seyin, a trainee of Mariupol Branch of “Shakhtyor” Football Club Academy for Children and Young People, selected to be a banner-bearer during UEFA EURO-12 final competition 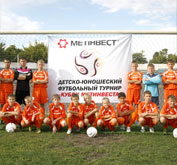 A student of Mariupol branch of “Shakhtyor” Football Club owned Academy for Children and Young People, “Azovstal-99” football team player, a silver medalist of «Leather ball – 2010» tournament named Vladislav Seyin, was appointed to be one of eight banner-bearers during final match of European championship of football which is to take place in Ukraine in July of the current year. In terms of implementation of “Metinvest” corporate social program ”Development of football for children and youth”, a young change of professional football players is being prepared in Mariupol branch of “Shakhtyor” Football Club Academy for Children and Young People. Just over the first quarter of 2012, investments made by “Metinvest” to develop the branch have amounted to about 560 thousand hryvnas.

«Shakhtyor» football club owned Mariupol Academy for Children and Young People has been into training of young sportsmen since 2005. During this period, remarkable sport achievements have been attained by its students thanks to experienced coaching staff of the academy, complex approach to training and coaching process and strong financial backing by «Metinvest» company aimed at developing of sports for children and young people and maintaining a healthy lifestyle.

The branch teams participate in various competitions including those of international level. Among achievements of 2011, there is silver medal at «The Leather Ball» and «The Hope» Ukrainian nationwide tournaments, victory in individual championship of «Shakhtyor» football club branches, leading positions in the second group of the first round of Ukrainian League of football for children and young people individual championship, etc. Besides, three young football players of Mariupol branch were selected to «Shakhtyor» junior team in 2011.