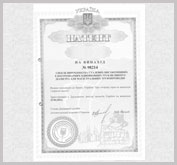 As a result of joint work of technical specialists of KHARTSYZSK PIPE, AZOVSTAL IRON & STEEL WORKS and FSUI “Central Scientific-Research Institute of Ferrous Metallurgy by Bardin" a patent No 98214 for the invention "Method for the production of steel high-electric single-seam large diameter pipes for pipelines"was got by KHARTSYZSK PIPE, AZOVSTAL IRON & STEEL WORKS. A patent was issued by the State Intellectual Property according to the Law of Ukraine "About the guard of rights for inventions and useful models".

We will remind that the joint council of specialists of KHARTSYZSK PIPE, AZOVSTAL IRON & STEEL WORKS and FSUI «Central Scientific-Research Institute of Ferrous Metallurgy by Bardin» took place in March, 2010 for the question of patenting of «through» technologies (from sheet to the steel pipes). And last year metallurgists Mariupol and Khartsyzsk received a patent for the joint invention «Method for the production of steel high-electric double-seam large diameter pipes for pipelines».

«In the whole world steel pipelines are used for transporting on large distances of natural gas and oil from the place of their production to the consumption areas. And there is no alternative for the steel pipes yet, — one of authors of invention Director General of KHARTSYZSK PIPE Iurii Zinchenko comments. — The carrying capacity of pipeline is determined by working pressure and diameter of pipes. The increase of durability of main metal and welded pipe joints allows to decrease the thickness of wall, that provides the additional cost saving at building of pipeline».