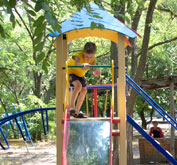 Metinvest Group Azovstal Iron and Steel Works allocated about 200 thousand UAH to the city for children’s playgrounds installation in terms of agreement of social and economic collaboration between the works and Mariupol city council. Five new children’s playgrounds will be installed in Ordzhonikidze district of Mariupol.

“It has become traditional for “Azovstal” works and Metinvest Group to take active part in city projects implementation in those cities where there are enterprises belonging to the Group present. The reason is because Metinvest Group enterprises activities are indissolubly tied to and determine the future of the cities where these enterprises serve as city-forming ones. I’m sure that new and modern children’s playgrounds will become a wonderful present for children of Mariupol”, Enver Tskitishvili, general director of PJSC “Azovstal Iron and Steel Works” pointed out.