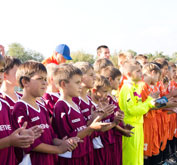 Corporate social program of Metinvest Group "Development of Children's and Youth Football" is implemented in partnership with Football Club "Shakhtar" and is focused on promotion of healthy lifestyle among children and young people by creation of new sports football sections for children and young people and maintenance of the existing ones in all the cities where Group enterprises are present, holding of elimination competitions and annual Metinvest Cup final tournament.

After eliminatory games final matches will be held for the main awards of Metinvest Group, which will determine the strongest team in each of the three age groups. Awarding of winners will be on September 28 at the stadium "Donbas-Arena" during the half-time in football match of 8th tour of Ukrainian Championship between teams "Shakhtar" (Donetsk) and "Chernomorets" (Odessa).

Igor Kirilyuk, Director for Corporate Communications of Metinvest Group, emphasized that modern young people needed positive examples, which would allow forming the correct view of their lifestyle. Sports is one of the methods for education of dignified and, mainly, healthy members of society, thus, annual football tournament, which is held under auspices of Metinvest, is an excellent opportunity to show the importance of active lifestyle and health care for the younger generation.