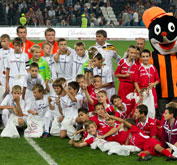 Winners and medalists of Metinvest Cup Football Tournament were awarded at "Donbass Arena" stadium on September 28. The tournament has been held since 2011 under the auspices of Metinvest Group within the framework of implementation of corporate social program "Development of Children's and Youth Football".

Medal ceremony was held during the half-time in important match of 10th tour of Ukrainian Premier League between teams "Shakhtar" (Donetsk) and "Dnepr" (Dnepropetrovsk), which attended more than 47 thousand viewers.

Enver Tskitishvili, Director General of PJSC "AZOVSTAL IRON & STEEL WORKS", emphasized: "Implementing program on development of children's and youth football, Metinvest provides talented young football players with excellent opportunity to make favourite sports hobby more promising. When playing professional football it is important for children to participate in large-scale competitions, so Metinvest Cup provides one more opportunity to show excellence and will to victory. Corporate social responsibility is one of the priorities of Metinvest strategy. Social investment policy, which is implemented by the company, is focused on solution of the issues important both for the enterprise itself and everybody in general".