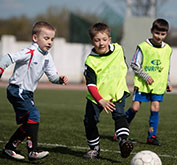 The Metinvest Cup Youth Football Tournament took place in Mariupol on September 17-20. Teams of children of employees of Metinvest Group enterprises participate in the annual tournament, which is held in partnership with the Donetsk Shakhtar Football Club.

Winning teams will be recognized on September 21 at Donbass Arena during a break in the Ukrainian Premier League match between Shakhtar (Donetsk) and Vorskla (Poltava).

The Metinvest Cup Youth Football Tournament, part of Metinvest Group’s corporate social program, is held to promote healthy lifestyles among children and youth. The program includes the establishment of new and support for existing sports and football associations for children and youth in all cities where the Group operates.