Enver Tskitishvili: "The Company Does Not Purport to Roll Back the Upgrading of Production Facilities" 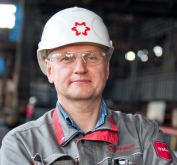 Enver Tskitishvili, Director General of PJSC "AZOVSTAL IRON & STEEL WORKS", assured that Metinvest Group does not purport to cut back on the energy modernization programs of the enterprise despite the crisis.

"I should say that now we are experiencing difficulties. And not only metallurgists. The Ukrainian economy at large is going through a bad stretch. But we cannot allow ourselves to stop the upgrading as the industry moves forward and the competition at steel market becomes more severe. Metinvest will invest in the development of the enterprises, especially in the energy saving projects. The crisis brings not only challenges and changes; this is the time to search for new ways of development, in fact - new opportunities. The company does not purport to roll back the upgrading of production facilities. So and in no other way we will ensure sustainable development of business in future", said Enver Tskitishvili.

As explained by Director General of PJSC "AZOVSTAL IRON & STEEL WORKS", now the company is looking for ways to save energy resources through the optimization of their consumption and usage of new cost-effective technologies.

Last year, PJSC "AZOVSTAL IRON & STEEL WORKS" reduced power consumption; the economic effect was 6.5 million US Dollars. According to the expert opinion, continuing the upgrading and introduction of energy saving projects in 2014, the company will save at least 7 million US Dollars, particularly at the expense of natural gas consumption reduction and its replacement with alternative fuel – blast-furnace gas.

Today, we have the task to reduce the energy intensity of production as much as possible and the consumption of expensive natural gas.

"Over the years of the Ukrainian independence Moscow raised the gas price ten times. And every increase is the impact on competitiveness of the Ukrainian metallurgical enterprises. Expensive natural gas is the expensive products. The more expensive metal is, the lower the sales are. And the only way out is to upgrade and introduce energy-efficient technologies. Nowadays all the Metinvest companies follow this principle. One of the ways of real savings and production efficiency enhancement is to replace gas in the blast furnaces with pulverized coal. Thus, the decision was made to construct PCI plant at PJSC "AZOVSTAL IRON & STEEL WORKS". Can we now talk about fixed dates? I think that in terms of political and economic instability we have to be careful in calculations and plans. However, this year we will complete feasibility study of the project and proceed to the selection of the designer and the supplier of equipment", noted Enver Tskitishvili.

PCI will allow the enterprise almost completely refusing the usage of natural gas in ironmaking and reducing coke consumption. "Donetskstal" and "Alchevsk Iron and Steel Works" followed that way. They were the first enterprises in Ukraine that implemented PCI at ironmaking. Given the current prices all this effects a saving of over 20 million US Dollars per month. PCI technology is already in place and brings significant economic and environmental benefits to Metinvest enterprises, such as "Zaporizhstal" and "Ilyich Iron & Steel Works of Mariupol". Construction of PCI plant has been launched at "Yenakiyeve Iron and Steel Works". Metinvest Group has already made significant contribution to the energy efficiency enhancement of the Ukrainian industry. Assuming that all metallurgical enterprises of the company apply PCI, natural gas savings per year will be ca. 890 million cubic meters. Thus, annual consumption of natural gas in Ukraine decreased by 2%, by 22 %, in the steel industry and by 12% in the Donetsk region.

Enver Tskitishvili, Director General of PJSC "AZOVSTAL IRON & STEEL WORKS", emphasized, "For sure, political crisis creates additional challenges. But metallurgists do not support attempts of destructive forces to split our country and continue to melt steel and modernize production. Energy saving is of high priority at PJSC "AZOVSTAL IRON & STEEL WORKS". We cannot allow ourselves to abandon the strategic development projects. You cannot get out the train under way. Thus, all our plans are in force".