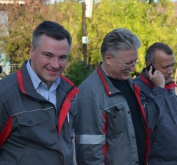 Steelworkers started patrolling Mariupol’s streets with local law enforcement officers at 6 p.m. on 11 May after training in district police stations.

According to Ryzhenkov, the workforces of Metinvest’s two Mariupol plants supported Metinvest Group's initiative to establish voluntary groups to patrol the city in line with the law of Ukraine on the participation of citizens in the protection of public order. Metinvest staff on the patrols will be unarmed and will focus on informing law enforcement of violations they observe and preventing possible criminal activities. City officials state that it is critical now to prevent looting, vandalism and robbery.

"People should not only feel that the police protects them as has been claimed for the last four months in various cities in the country; they should also feel that they cooperate with the police. People should be concerned about the state of our law enforcement bodies, their moral state and their work," said Ryzhenkov.

Yuriy Khotlubey, mayor of Mariupol, said: "We are not starting from zero. This initiative to help provide public order is legal and has long been formalized in the city. It was a task for district administrations and police stations. I would like to state that the city was patrolled on 9 May in the evening and on 10 May as well by our city guard. Metinvest's initiative for Ilyich Iron & Steel Works of Mariupol’s and Azovstal's workforces significantly strengthens this work and establishes better conditions to ensure order in our city. We support this initiative in every possible way."

Sergey Eliseyev, worker in Ilyich Iron & Steel Works of Mariupol’s railway shop, said that the city needs such patrols, "People pay attention and thank us for our cooperation with law enforcement. We need the support of the police, especially after the recent events in our city. Each engaged male will protect his city, his house and his family. We see that our presence supports the citizens so that everything is quiet and peaceful."

Denis Gladyshev, fitter in Azovstal's rolling equipment maintenance shop, joined the patrols and began working on 11 May, "My heart is with my native city. I was born here, spent my childhood here and live here. My relatives and family members are here. It is sad to see people try to tear the city apart. The work crews help the police to maintain peace and avoid looting. Our presence in the streets make citizens believe in the best. I am here to protect my family."

According to Tskitishvili and Zinchenko, more than 500 steelworkers expressed a desire to assist the police in bringing order to the city within hours of the announcement of the establishment of the patrols. 120 Mariupol steelworkers started patrolling the streets on that first night.