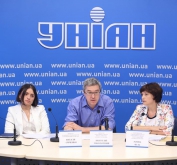 Today UNIAN information agency has arranged a press conference to present a Humanitarian Center established to help Donbass citizens. Rinat Akhmetov decided to set up the Center consolidating the resources of his Foundation, all businesses of SCM Group and FC Shakhtar to provide the most help to all the people in Donbass and Lugansk oblasts suffering from the military actions.

Anatoliy Zabolotny, Director of Rinat Akhmetov Foundation, says that humanitarian aid and lack of places for forced migrants has been a major issue.

"When they began to shoot in the towns of Donbass, the founder of our Foundation, Rinat Akhmetov, set a clear objective to help peaceful citizens who are in trouble and do everything we can . Since 23 May the Foundation and SCM Group's businesses have evacuated more than 18,000 people from the war zone. Particularly, the Foundation evacuated over 10,000 people, more than half of them being children. According to the UN information, it accounts for around 15% of all displaced people and at least 30% of those who needed evacuation assistance. The Foundation accommodated and took care for more than 5,500. More than 20,000 received humanitarian aid. Evacuation is the most challenging and important part in our work, but there are also issues with placement, help in the relocation areas, assistance to those staying in Donbass and preparations for autumn and winter. We have gained huge experience over  the recent months and understand that we need to use it as much as possible. Therefore, we are consolidating our efforts to achieve more and help all in need," said Anatoliy Zabolotny.

The Humanitarian Center is offering assistance in four main areas. Firstly, it helps to evacuate orphaned children, mothers with many children, people with disabilities or severe illnesses and old people from the military zone. The Center delivers humanitarian aid to many towns and villages cut off from water, electricity, food and medical supplies. The Center also helps with accommodation in camps and health centers to those who have left the military area. Targeted assistance "here and now" to those who need it most, particularly children, who lost their parents in the war, is another aspect of the Center's activities.

Rimma Fil, coordinator of the Humanitarian Center, explained why it was important to establish it:

«Rinat Akhmetov Foundation has been working 24/7 since the first days of the military operations. The businesses of SCM Group have helped since the first days of the war. The facilities of its production businesses accommodate displaced individuals. Psychologists and volunteers are also helping. Brusnichka is delivering food. Shakhtar has been helping its fellow countrymen as always. However, the tragedy is so big that all possible efforts must be united now. This is exactly the case when 1+1=3! Therefore, Rinat Akhmetov decided to establish the Humanitarian Center dealing exclusively with the assistance to the people, the residents of Donbass. It will consolidate all resources of SCM Group - the plants, factories, FC Shakhtar and the Foundation. We are talking about the Center because we need an efficient mechanism working like a clock with functions and roles distributed, and most importantly, being inspired by the belief that we are doing what the people of Donbass need - helping them to overcome the trouble and survive. We have been working actively with international organizations, regional state administrations, NGOs and volunteers. And special thanks to the latter - priests, teachers, doctors and journalists of every age".

The Humanitarian Center will have mobile crews operating both in temporary location areas and the military zone. The Center will be headquartered in Mariupol.

A universal multi-channel number will be available starting from 11 August. We will share it later.