The Azovstal employees celebrated the anniversary of their enterprise 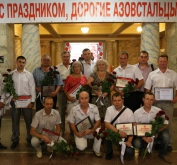 During the official meeting the employees of the enterprise were greeted by the CEOs of “PJSC “AZOVSTAL IRON & STEEL WORKS”, Metinvest Group, as well as the representatives of the municipal authorities. It is worth noting that Azovstal veterans who were and still keep being reliable professional examples for the metallurgists of the current generation were also invited for the celebration.

A lot of acknowledgements were addressed to the metallurgists of “PJSC “AZOVSTAL IRON & STEEL WORKS” during the festive evening. However, most of the thankful words were told for the continuing peace. Workers of this “fiery” profession managed to support their native town at the most complicated moment when volleys of automatic gunfire were permanently heard in the streets and wreckers acted with impudence everywhere. The voluntary people’s guards reestablished peace and order in Mariupol, furthermore, they brought a stop to the wave of violence and anarchy. Their bold move has consolidated all the citizens of Mariupol who joined in with patrolling around the city in the framework of Voluntary Citizen Patrol.

On this solemn occasion the Azovstal workers were decorated with Certificates of Honour and a lot of grateful words were directed to them for their selfless labour and career achievements. In addition to this, results were reviewed within labour competitions. So, the best electricians, welding operators, mechanics and genuine professionals of other specialties gained prizes. The final part of the celebration was marked with an impressive concert program with the participation of on-stage performance groups of the city.

- I would like to thank the entire work personnel for valorous labour. We are holding high the bar of “Azovstal” and we keep on redounding worldwide to the fame of our enterprise. The modernization of production is being implemented more and more actively, the environmental situation is being improved according to a plan, the social assistance to municipal hospitals, schools and kindergartens has been increased, roads and ambulances are under repair, the enterprises help to develop public transport. In brief, even in this grave period we are moving forward into our future with confidence. We have demonstrated to everybody that we possess not only the ability to make steel and iron, to produce coke and rolled production. The Azovstal workers have proved their patriotic feelings and love to their native city by means of real deeds. We have acted like true peacemakers. Metallurgists showed their civil courage and matureness on the days when even the militia were afraid of going outside to inspect the city. People’s guards involving metallurgists have become a stronghold of peace and stability in Mariupol. The Azovstal workers have always been notable for solidarity and consistency of aim, as well as for significant level of professional qualities. We altogether have splendid perspectives ahead of us. We have made our choice directed towards leadership and we will never abandon this route.

- Being our common working house, PJSC "AZOVSTAL IRON & STEEL WORKS" has become much closer and dearer to all of us for the last year. As a matter of fact, the year is complicated indeed. However, we continue to produce metal for the country, people are getting salaries on a regular basis, while the state and the city are gaining taxes. The enterprise is continuously expressing the extent to which it evaluates the employees. The average salary has already overcome the rate of six thousand grivnas. It is the next higher index than the equivalent one branch-wise and citywide. And all the above mentioned have become possible in the very period when the countrywide crisis and military activities are actually leading to shutdowns of industrial enterprises.

- In such complicated conditions that our region and our country are experiencing today the working personnel of “PJSC “AZOVSTAL IRON & STEEL WORKS” has undertaken an extremely difficult mission of retaining peace and order in our city. Hence, on behalf of all the citizens of our city I am uttering words of profound gratitude to you. You have preserved the city, you have experienced serious obstacles and you have convinced people in that we should keep together in the boundaries of our unitary and indivisible Ukraine. Fortunately, we succeeded in this effort as we have united with each other. You have saved Mariupol from destruction and chaos. In the end, namely you are building the future of our city with your efficiency.