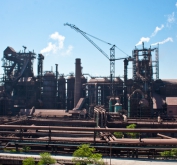 In addition, taphole gun, dust collector equipment and other furnace systems were overhauled and repaired.

- In the midst of military operations, Metinvest Group made tremendous efforts to keep the iron and steel works of Mariupol working. We found ourselves under most difficult conditions, with the logistics disturbed and the established coke and iron ore raw material supply chains broken. But the company managed to hold out, due to its vertical integration; not a single social or environmental project was frozen, the production revamping is also continued. The answer to the question, if we will be able to continue providing jobs to thousands of people and consistent paying of wages and taxes, depends on politicians. From the very beginning of the Donbas conflict, the steelmakers supported the viewpoint of SCM shareholder Rinat Akhmetov, who called continually to search for diplomatic ways of conflict resolution; now it is clear that he was right. We still maintain our common position: Ukraine, our region and city need a lasting peace. It is only an open round-table dialogue that can ensure the security of citizens at Donetsk and Lugansk regions, renew the disturbed infrastructure, and restore the economic growth of Ukraine.

METINVEST is a vertically integrated mining and metallurgical group of companies that manages assets in each segment of production chain, from extraction of iron ore raw materials and coal, as well as coke production up to manufacture of steel semi-finished and finished products, pipes and coils and also manufacture of other high-value-added products. The Group incorporates mining and metallurgical enterprises located in Ukraine, Europe and USA and has sales network covering all global key markets. Metinvest Group incorporates Metallurgical and Mining Divisions. According to the strategic vision of Group it is aimed to become the leading European vertically integrated steel manufacturer with sustained growth and profitability, despite the cyclical nature of markets, and provide investment yield above the industry standards. For the first quarter of 2014 ended March, 31th, 2014, the Group reported revenues of US$2.9 billion and an EBITDA margin of 30%.