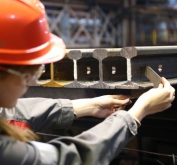 PJSC “AZOVSTAL IRON & STEEL WORKS” (Metinvest Group) has mastered manufacturing of a new profile of mine rails Р34, so as early as in the coming days those rails will be utilized in coal producing mines of DTEK.

The first lot of mining rails with total mass of 220 tons is intended for the coal-mining association “Pavlogradugol (DTEK)”. In contrast to standard railroad rails, the new production is manufactured in a lighter form, weighing 34 kg in a linear meter, as well as of a compact length, 10 and 11 meters, in order to facilitate track laying in narrow and serpentinous mine tunnels. Apart from that, upon the customer’s demand the new mining rails are equipped with holes for joint assemblies at their ends.

Mastering process of the new profiles was fulfilled at Heavy Section Mill and Rail and Beam Shop of the enterprise. Specifically for that purpose, outfit of the rolling mill and other technological equipment has been upgraded, as well as new technological procedures have been implemented at “AZOVSTAL IRON & STEEL WORKS”. All the preparatory activities lasted for about 7 months. Experimental rolling was performed as far back as in September, while later professionals of the enterprise rolled out the first lot of mining rails Р34 from the total amount of 8.

PJSC “AZOVSTAL IRON & STEEL WORKS” is working upon mastering of new production types on a regular basis. Thus, at the end of August the enterprise proceeded to manufacturing of high-strength steel plates that comply fully with the requirements of the European Standards.

“Currently, the Ukrainian iron and steel industry appears to be in extremely complicated conditions. The anti-crisis strategy of PJSC “AZOVSTAL IRON & STEEL WORKS” (Metinvest Group) is based upon mastering of new production types, modernization of production capacities, personnel training and professional development of every employee in our collective of thousands. The said strategy enables us to maintain advanced positions at the metallurgical market and to develop confidently”, has emphasized Enver Tskitishvili, the Director General of PJSC “AZOVSTAL IRON & STEEL WORKS”.