Blast Furnace No. 6 shut down for a major overhaul 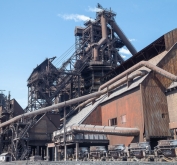 Shut down of Blast Furnace No. 6 progressed pursuant to the developed technological operations. Currently, the cool down process of the furnace completed. Preparatory works for the structures dismantling and major overhaul are in progress.

In the course of the overhaul of Blast Furnace No. 6 at Azovstal Iron and Steel Works, the modernization of the charging system and stockhouse, reconstruction of the casthouse and furnace itself will be carried out, a new cooling system with copper coolers, a new lining and a bell-less top charging system will be installed.

Also, preparations are in progress for the construction of a slag granulation and the connection to the pulverized fuel injection (PCI) plant. Currently, the slag granulation located near the blast furnace is considered the most rational type of processing, because it excludes of the fleet of slag ladles from the operation, significantly simplifies the logistics, reduces the cost of production and burden on the environment.

"Metinvest Group is accurately fulfilling its commitments taken before the local community. Major overhaul of Blast Furnace No. 6 continues the series of the phased modernization of the blast furnace capacity at Azovstal. The blast furnaces are being upgraded one by one based on the European environmental requirements with the transition to the closed-loop cooling system”.