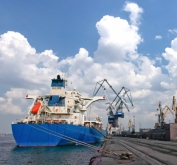 Metinvest Group has to resume shipment of raw materials to Ilyich Iron and Steel Works of Mariupol and Azovstal via seaports because of low throughput capacity of the Kamysh-Zarya – Volnovakha railway section, the only rail road connecting Mariupol to the rest of Ukraine.

Constrained throughput capacity of the railway section does not allow increasing capacity utilization at Mariupol metallurgical plants and produce the planned 19.5 thousand tonnes per day. Instead of required 16 cargo trains per day, the Ukrainian Railways (Ukrzaliznytsya) managed only 13. This was due to shortage of locomotives and inefficient operation of the railway: untimely supply of diesel fuel and spare parts, fuelling of the locomotives only in the assigned depot and suboptimal schedule of the shift locomotive teams.

In order to fulfill its obligations to its steel customers, Metinvest decided to renew the practice of cabotage transportation (coastal shipping) raw materials that were stopped in November 2015. In the nearest months, it is planned to transport approximately 200,000 thousand tonnes of iron ore concentrate to Mariupol ports via Berdyansk Port. The seaborne logistics will engage both large-capacity and small capacity vessels. In the beginning of April the first vessel with iron ore concentrate was unloaded in the port of Azovstal, the second vessel is awaiting to be unloaded.

Alternative route is a forced measure leading to significant escalation of cost of raw materials supply ($8-15 per tonne) and, as a result, increase cost of iron. Additional logistical expenses bring the variable costs of the metallurgical plants to steel sales prices, while currently the steel makers do not see another solution in the current situation.

- We have applied several times with an initiative to implement a strategic project to increase cargo transportation traffic to Mariupol to the level of 22 cargo trains. However, neither Ukrainian Railways nor the Ministry of Infrastructure consider it a priority. Instead they are willing to keep raising the cargo transportation tariffs. Just the most recent increase by 30% generated UAH 9 billion for the monopoly. Nevertheless, they could not find finance to increase the throughput capacity of the railway section that is a key for Mariupol.

Metinvest invested more than UAH 20 million to recondition the locomotives of Ukrainian Railways. Even this step by the steel makers did not result in a radical improvement of the situation. Lack of willingness of Ukrainian Railways to approach this issue systemically will prevent increased production in the front city. The price of the indifference by Ukrainian Railways is short-received foreign currency revenues in the volume of approximately $1 billion per year and forced production decline at the metallurgical, iron ore, coke and chemical, flux and dolomite and ferro-alloy enterprises of Ukraine. Obviously, for the Ukrainian Railways it  is easier to generate additional revenue from the indexation of the cargo transportation tariffs, rather than from additional volume of cargo transportation.

We are prepared to develop joint win-win solutions with Ukrainian Railways to benefit all, including the local communities and the state. But to achieve this, a proactive and responsible position of Ukrainian Railways is important regarding the issue of the cargo transportation development in the direction of Mariupol.